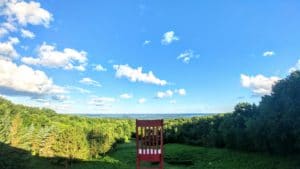 I arrived at Wawanissee Point, an opening atop the Baraboo Range’s eastern, southern face, 800 feet above the Wisconsin River and Lake Wisconsin valley. I stepped through the luxury villa’s foyer to the Inn’s massive Great Room window. Like other guests the mesmerizing view left me breathless. I could see 36 miles south to Wisconsin’s Capitol dome in Madison, where I had been last. The American Ho-Chunk Indians named this panoramic vista overlook Wawanissee (pronounced wah-wah-NEE-see), meaning beauty or beautiful. The name is still fitting.

After adjusting to the captivating first look, I began trekking through this outdoor recreation hub. Innkeeper Dave Holdener and his friend, nature adventurist and photographer Derrick Mayoleth escorted me to ride the free Merrimac Ferry in Merrimac, Wis.—the site is in the National Register of Historic Places. In minutes we crossed Lake Wisconsin to reach the Gibraltar Rock State National Area. We hiked a long, winding but nicely surfaced path to the top of this 200-foot sandstone butte. Here 1,234 feet above sea level I experienced more stunning, panoramic views, to the north across Lake Wisconsin to Wawanissee Point in the Hills, and south and east across miles of picturesque farmland toward Lodi.

Returning to the Inn I rested on the Baraboo quartzite stairway in the Inn’s prairie-terrace garden with the southern vista. This rock only found in Baraboo!

The next morning Derrick picked me up at 5:00 a.m. to see the state’s most visited park, Devil’s Lake State Park www.devilslakewisconsin.com, seven miles west of the Inn. 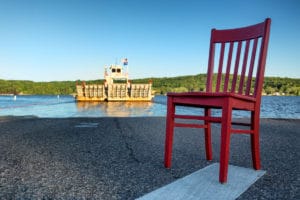 At the south shore Derrick carried me on his back past the massive Bird Effigy Mound skirting the lake (see an aerial picture here), up through the southern terminal moraine that formed the lake, along a rocky bluff face on the Balanced Rock Trail, a segment of the Ice Age National Scenic Trail. We reached Devil’s Doorway, one of the park’s most iconic rock formations atop the 500-foot cliffs that surround the spring-fed lake. (Thankfully I’m not afraid of heights.) The quartzite’s pink and purple hues are from iron oxide hematite and other impurities in the rock. I couldn’t leave before trying paddle boarding; you can rent these at the park besides other crafts!

For contrast we then hiked into the sandstone gorge just east of the park, Parfrey’s Glen State Natural Area, an anomaly in the Range with a unique microclimate that caused this to become the state’s first protected natural area, a designation more safeguarding than a park. Here I cooled my feet in the cold, hardwater stream at the base of the 100-foot cliffs where numerous rare and endangered species live. You can easily see more geologic history here.

In the Inn’s island garden I rested beside the new ash-stump carving of a sandhill crane. I also saw the resident sandhill pair feeding its young in the field adjacent Wawanissee Point.

Nightly I relaxed during the evening wine-and-cheese hour in the Inn’s Indigo Lounge watching sundown paint the valley view. Dave said I had earned an adult beverage. I chose an estate glass of what else…Red…from the nearby award-winning Wollersheim Winery & Distillery, one of the oldest wineries in the country in its 44th year of production.

My Wawanissee Point stay whetted my appetite for the numerous renown Baraboo-area attractions, so Dave escorted me in the Inn’s limo 10 minutes into the city of Baraboo to the historic Ringling House Bed and Breakfast where I’ll learn about Baraboo’s extensive circus history and culture. Read about my second Baraboo stop at ringlinghousebnb.com.

About The Red Chair Travels 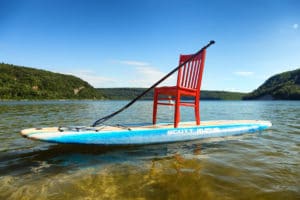 The Red Chair belongs to Woods Hole Inn innkeeper Beth Colt of Cape Cod, Mass., who first photographed this chair in 2012 on the frozen pond behind her bed and breakfast. She posted the photo on Facebook and it enamored people. A California nature photographer arrived to photograph the chair on a beach, spurring the concept of the chair traveling the country—similar to Flat Stanley—visiting bed and breakfasts to raise awareness of their comfort and personalized hospitality in unique places. A partnership with BedandBreakfast.com has allowed Red to travel coast to coast and to Alaska, now visiting more than 250 inns and bed and breakfasts. Innkeepers have captured Red’s journey in words and photographs at www.redchairtravels.com/blog. Let Red’s unique story inspire you to hit the road and stay in beautiful destinations with friends you never knew you had. 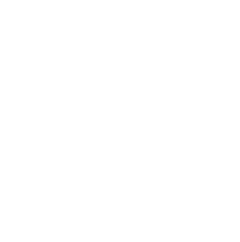